A first time visitor to Mballing Fish Landing Site, in Mbour, Senegal, where over one hundred and fifty-six women carry out diverse fishing activities, is welcomed by the sweet aroma of salted fishes. As a visitor walks towards the sea, make-shift stalls materialise, all housing fishes of different shapes and sizes. Sights of women, men, and children as they interface and interact reminds you that the landing site is a community.

Fish mongers, who are mostly women are seen scaling their fishes by the riverbank; pouring them into the locally-made hole, after which they are salted for preservation for a few days. The fish mongers said that preserved fishes are packaged for export to neighbouring countries like Togo, Benin, Mali, Burkina Faso and Ghana who are the major consumers of the Mballing fishes.

However, beneath the facade lies the untold story of women, striving to eke out a living from fisheries but abandoned to fate by the state.  It’s a double whammy: poor working condition and lack of requisite infrastructure for fish preservation complicate things for these brave women. 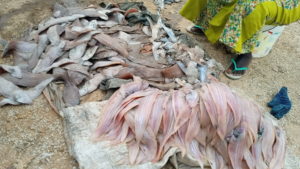 “From the landing site, it takes close to two hours for the goods to get to the major markets. Aside this, the women still work under a bad condition with the old way of preserving their fishes. It’s a big challenge from when the fishes land at the site, to the scaling and eventually using the local charcoal ovens to dry them,” said Ndoye.

“The condition we find ourselves is sad, as many of these women labour so hard and also get ill easily due to the method they use drying the fishes before its goes to the markets.”

She also noted that the state council in charge of clearing fish wastes and remnants do not come around to do their jobs, and the women have to throw their waste into the ocean, which end up causing serious environmental pollution.

“Fish waste and the oil that comes out of the dried fishes litres the environment. We also expect owners of fish meal factories to come and pick the remnants from production of the fish meals,” Ndoye added.

For his part, Abdoulaye Niang, the chief operating officer (COO) of the Mballing Fish Products Processing Site, explained that the fish processing site came into being in the year 1999. He said that is gradually modernizing to help export their businesses abroad, as there are a lot of scarcity of some species of fish such as the sardine since the Year 2000.

“We use to have good catches but due to climate change, things are really difficult for us and the women in the business, we have very little product available for sale,” said Niang.

“Our women are not on ground as there are no products from the sea, this place is always filled when there are fishes to salt and scales for customers who come for them, as we have many ovens that are in use.”

He added that there are modern day solar oven, which are being built and initiated by the Ministry of Fishery to help reduce the stress the women go through. These modern oven according to Niang, takes more than forty baskets of fishes and “they are very fast to carry out the womens’ activities.”

He explained that the processing site initially belonged to the Senegalese state but was later concessioned to the Mbours for professionals to handle its activities.

“The women group are giving funds of about three thousand CFFA for six months to boost their small-scale fishery business, through which they have been able to buy materials to conduct their businesses here,” Niang added.