En Bref
You are at:Home»News»Nigeria: An artisanal fishing community loses its allure

Six months ago, when Pauline Venfonde lost her husband, her expectations were that her two children would be a consolation. She had anticipated that a makeshift stall for processing fish left behind by her husband would suffice for her family but she was wrong. On 10th November 2016, men suspected to be representatives of the Lagos state government raided the community and set her house and the houses of other residents in the riverine community to fire; sealing her hope and those of many others, who survive on artisanal fishing in Otodo Gbame riverine community.

Otodo Gbame is a waterfront community in the Lekki axis of Lagos State in south west Nigeria. The men of Otodo Gbame are known for small-scale fisheries and the women earn income from fish smoking.  Fishing is a marker for unity in the community and a non-discriminating vocation for all ages, ethnicity and religion. This was the scenario that captured everyday life in Otodo Gbame until that fateful day in November when the Lagos State government raided it and stripped it off its fishing allure.

Pauline is a one of the many women fish smokers in Otodo Gbame. While her husband undertook fishing activities, Pauline smoked the fish and retailed it across several markets in Lagos.  But Pauline is in agony, not on the basis of depleting fishery resources but the on the order of the Lagos state government. The state government was said to have issued an order to residents of Otodo Gbame to relocate.

“The eviction notice has made life difficult for me and my family. We have depended on fishing to survive and send our two kids to school but with this eviction it is no longer possible to survive and we don’t know where to go from here. Fishing is our life,” said Pauline.

Fieriety Fagben, a fish seller concurred that fishing was a means to meeting the financial requirements of many families in the community. “On daily basis, each canoe returns with an average of 80 pieces of fish daily, which is sold for about N4000,” said Fagben.

“I am in partnership with my friend Alice Avanda (pointing to her) and we smoke about 300 pieces of fish daily and our profit could go as much as N8000 daily depending on the quantity of fish we smoke”. 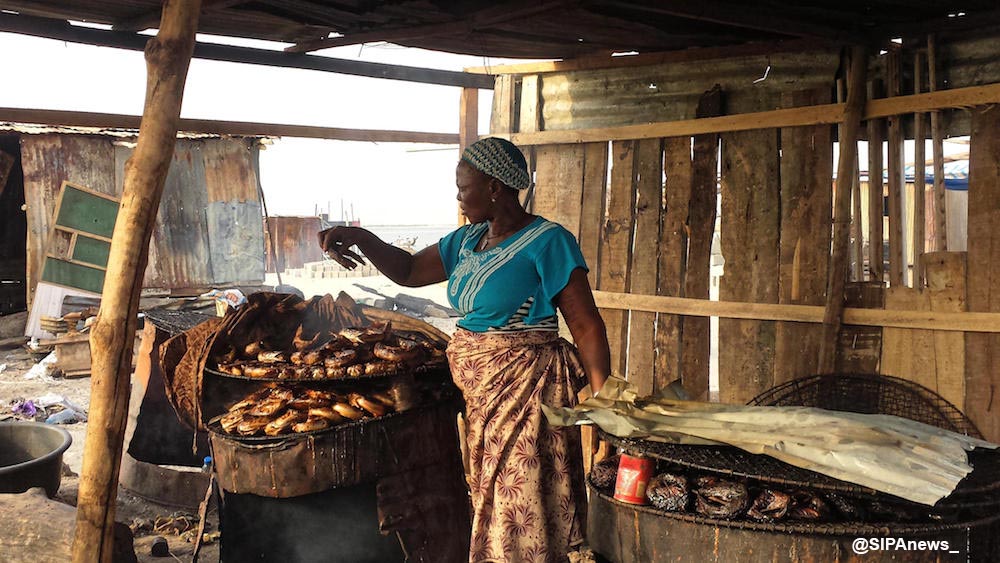 Fieriety Fagben, manages to restart her fishing business after the incident.

The raid on Otodo Gbame has contributed in making fishing unattractive. Abel Akando, another fisherman in the community said fishing has become an unstable business for him and other fishermen. “Every week I buy 20 litres of petrol at N3000 to operate my boat since you don’t know the day you will be lucky,” he said. The situation is further complicated by Akando’s loss during the raid on Otodo Gbame. His fishing nets were part of belongings that were razed by fire during the raid on the riverine community “I need about N66,000 (US$216) to buy another net. I now follow other fishermen to fish so I can at least feed my family but everything has changed,” Akando lamented. Akando disclosed that since the raid on the community it has become difficult to make N1,500 on a good fishing day.  “There is an atmosphere of fear in our community that our families could be attacked which has made us more cautious in going out for fishing. These days I hardly catch 20 pieces of fish when I go fishing,” he added.

Even residents of Otodo Gbame who are not into artisanal fishing lament the impact of the raid on their business. They emphasised that they no longer get jobs to repair nets and other fishing accessories of fishermen. Elizabeth Odon also shared that her parents are not into fishing but artisans who rely on fishermen to get jobs.

“My father repairs fishing nets and fishing accessories but things are difficult now because fishermen are no longer bringing jobs anymore. The raid on the community is affecting the entire chain that depends on the hitherto thriving fishing enterprise in the community”.

However, Steve Ayorinde, Lagos State Commissioner of information said that the waterfront community was razed by fire incident that emanated from the ethnic conflagration between the Eguns and Yoruba residents within the community. He denied that the state government had any remote connection with the fire that razed the community.

The residents of Otodo Gbame counteract this narrative, insisting that the thugs that raided the community were cover men policemen. Inzu Celestine, a resident and youth leader of the community said armed men suspected to be thugs aided by the police invaded the community, torched everything in sight in a bid to evict the people.

The raid on Otodo Gbame has put the livelihood of more than 30,000 people whose survival largely depends largely on artisanal fishing on the line. The case of fishermen in Otodo Gbame is one of the many challenges facing small-scale fisheries in many African countries.

The Food and Agriculture Organization of the United Nations (FAO) has developed a Voluntary Guidelines for Small-Scale Fisheries that takes into account the key role of small scale fisheries in “ensuring food security and eradicating poverty” but the guidelines are yet to be implemented in some African countries. Attempts to confirm the domiciliation of this guideline in Nigeria has not been successful.

However, it is hoped that governments in Africa should begin to hold dear the role of small-scale fisheries in the food chain.

By Kingsley Uyojo, a freelance Journalist. He is regular writer for Nigerian’s flagship print media, The Guardian Newspapers Limited, publisher of the The Guardian.