En Bref
You are at:Home»News»Burundi»Burundi: Snail fishery changes the life of a whole family

In Burundi, Two years ago, the fishery products were confined to only two fish species namely  Mukeke, Indagala,  tilapia,  Sangala, Kambale.  And recently, the snail was added to this list. This brought a change to the daily life of Dogodogo lake dwellers, in west of the country. « When the Chinese got to our province for a road construction works, I got it from a friend of mine from Bujumbura that they do enjoy the snail », entrusted Youssouf Ndiyo, a man of fourty years old,  and father to four children.

This triggered the people to profit from this « treasure hidden in this tiny lake », according to his wordings. « I was already a fisherman. But the snail did not mean anything to me. Nor for the other fishermen.  When we go to set our nets to catch fish, we usually have also snails.  We then take the fish and throw the snail back to the water because we consider them worthless », the fisherman explained.

A treasure so far ignored

Today, everything has changed. Youssouf Ndiyo is now one of the biggest snail fishermen in this area. Sat on a small canoe replenished with snail, Youssouf reveals his annual incomes: « the price of 1 kg is around one American dollar. Per week, there are high chances that you make 70 dollars. That provides me with 300 dollars per month ».

During all his life, Youssouf Ndiyo never got such amount of money in one month. Precising that almost all his catches are sold to the Chinese-owned restaurants in Bujumbura, he doesn’t hide his satisfaction after fishing the snail for one year: « Today ,I have bought myself a bicycle , I built my house with corrugated steel roof  and well cemented ,and I no-longer have worries sending my children to school, and caring for them when they get sick , etc ».

He has already three fishermen in his account. And that is not all. « I even have a bank account while in the beginning all the money from my fishing activities was completely spent out. There was no means of saving because a part of the catch was consumed at home », precised the fisherman, without pride. 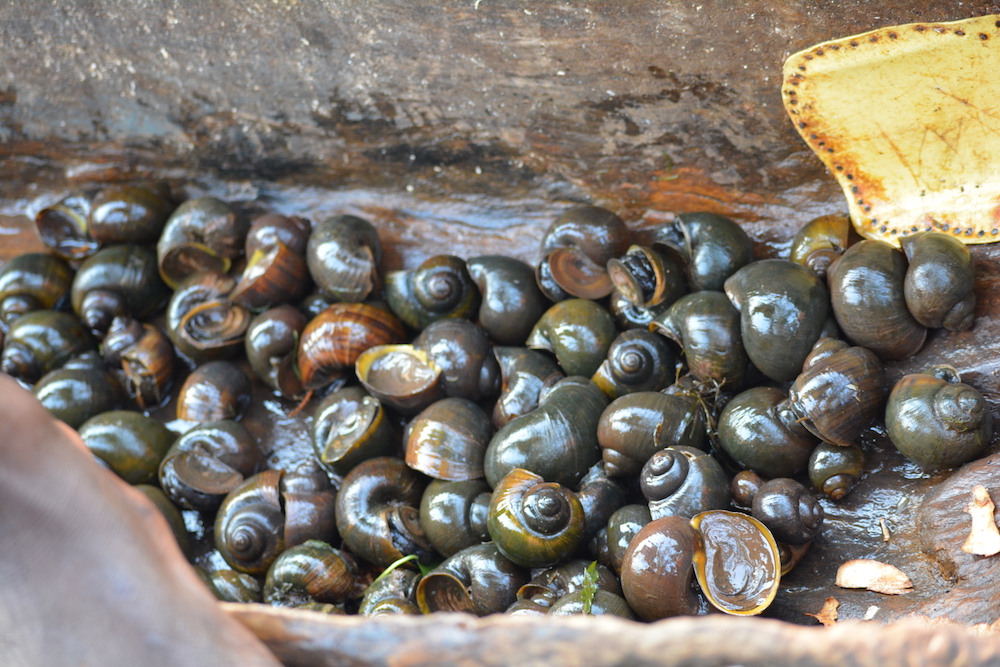 A family in Joy

Refusing to reveal her identity like many Burundi rural women, Youssouf wife, aged thirty, witnesses: « at home our lives have changed. Less than one year ago, I used to walk bare feet, I had only three clothes, and we used to sleep on a mat.  But now everything has changed » . These times of hardships when the couple used to strive to send their children to school, are now left behind. « There is even a neat improvement of relationship between my husband and me. And given that our children have enough to eat, hardly do they fall sick   », she retorted with a smile.

And Sébastien Nzitonda, 30 years, and his neighbor added that even if Youssouf was not that poor prior to the snail fishery, there is now a great change. « Because he discovered the market first, and all his catches are sold. And as a result he is making a lot of money and his family’s life has changed », he declared with envy. This farmer is happy to have Youssouf as a friend: « anyway, today, I don’t have any trouble finding somebody to lend me some money. When I am in need, he comes to my rescue without hesitation. I do pray for his activities to blossom », declared Sébastien Nzitonda.

A delicious and healthy dish

Youssouf has already tasted a dish made of snail pieces: « One day, I brought my production to a Chinese client. After cooking, he gave me a bit of it.  And I found the dish very delicious ». And Alexis Harimenshi, a dietician, added his bit to the story: « the snail meat is very rich in proteins. It is recommended for the people having lungs issues and it is a very handy remedy to face digestive disorder».

Nonetheless, Youssouf Ndiyo regrets the fact that the local populations ignore so far this « dish of which taste can be compared to a grilled fish ».  But he has his own idea as to initiate them. « I am planning to set up a Special Snail restaurant in Cibitoke provincial district », He announced, hoping to win other clients, a part from the Chinese and Asian restaurants running in Bujumbura.